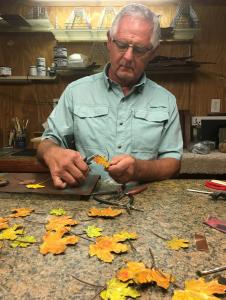 Gerald Tobola, award winning copper artist, left the corporate world in 2003, and transitioned from hobbyist to a full-time artisan. He has worked exclusively in copper for over twenty years. Gerald's first work was one of necessity as he explains, "I had a Mesquite lamp base in need of a shade, that in my mind, had to be copper." Gerald found that he was drawn to copper - a material that is malleable and forgiving, but its surface is unpredictable, each piece reacting to its environment, developing its own patina as it ages. His love of nature, especially tree leaves, is his top inspiration.

Gerald and Debbie, his wife, owned and managed Copper Shade Tree Gallery in Round Top, Texas for 15 years.  Gerald has appeared on HGTV, a national television network, where he demonstrated his craft, as well as, Texas Country Reporter. His work was displayed at the Smithsonian Institute Center for Folklife and Cultural Heritage in Washington D.C. , where he represented Texas.